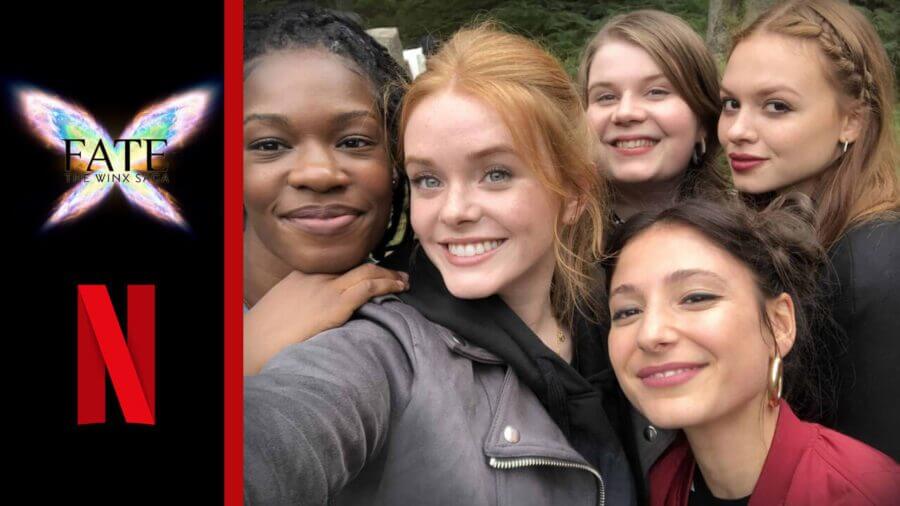 To all the fans of The Winx Club: rejoice! After a 16-year wait, the long-anticipated live-action series will be arriving on Netflix in 2020. We’ll be keeping track of everything there is to know about Fate: The Winx Saga, including the plot, cast, trailers, and the Netflix release date.

Fate: The Winx Saga is an upcoming Netflix Original young-adult drama series, based on the highly popular Italian/American animated series Winx Club. The Winx Club franchise has been extremely popular with young girls since its debut in 2004, and the live-action adaptation is intended to be for those who grew up watching the cartoon.

The series was created by Ignio Straffi, who is an executive producer for the Original. Directing the first season is Lisa James Larsson and Hannah Quinn.

Serving as the showrunners are Brian Young, Judy Counihan, and Kris Thykier. Archery Pictures, Theykier’s company, is involved in the production of the Fate: The Winx Saga as revealed by DiscussingFilm in July 2019.

When is the Netflix release date for Fate: The Winx Saga?

Netflix has yet to announce the official release date for Fate: The Winx Saga, but unlike what we originally we were told, it doesn’t look like season 1 will arrive before the end of 2020.

Instead, FormulaTV reports that according to an event they attended, it will be on Netflix in the “first quarter of 2021”. That means season 1 of The Winx Saga will be coming to Netflix between January 2021 and March 2021.

What is the plot of Fate: The Winx Saga?

With her dangerous magical powers beginning to manifest, Bloom must adjust to her life in the Otherworld.

Netflix has provided a full synopsis via its media site which is as follows:

“Fate: The Winx Saga follows the coming-of-age journey of five fairies attending Alfea, a magical boarding school in the Otherworld where they must learn to master their magical powers while navigating love, rivalries, and the monsters that threaten their very existence. From creator Brian Young (The Vampire Diaries), Fate: The Winx Saga is a live-action reimagining of the Italian cartoon Winx Club from Iginio Straffi.”

Who are the cast members of Fate: The Winx Saga?

Abigail Cowen will be taking on the role of Bloom, which should come as no surprise considering her natural red hair.

Fans of Chilling Adventures of Sabrina will recognize Cowen for her role as Dorcas, which would now explain why her character was recently killed off in the most recent season.

Abigail Cowen will be portraying Bloom in Fate: The Winx Saga

Danny Griffin has only been acting since 2017, but the role of Sky will be the young actor’s second role in a Netflix Original and his first leading role to date.

Naturally, he looks like a great counterpart to Abigail Cowen’s Bloom, so expect to see plenty of romance unfold between the pair on screen.

Danny Griffin will be portraying Sky in Fate: The Winx Saga

Hannah van der Westhuysen has only recently returned to acting after a small number of roles as a child. Aside from Fate: Winx Saga, she’s landed herself in some upcoming film roles.

Fate: The Winx Saga will be the first Original of her acting career.

Hannah van der Westhuysen will be portraying Stella in Fate: The Winx Saga

Fate: The Winx Saga will be the first big break for Elisha Applebaum’s career. As a relative unknown, there will be many Winx fans eager to see her on-screen portrayal of Musa.

Elisha Applebaum will be portraying Musa in Fate: The Winx Saga

Netflix subscribers may recognize Freddy Thorp for his role as Chris Chalal in the Original series Safe, starring in all eight episodes alongside Michael C. Hall.

Expect many girls to fall in love with Freddy as Riven, especially when his inevitable romance with Musa begins.

Freddy Thorp will be portraying Riven in Fate: The Winx Saga

2020 will be an incredibly big year for actress Precious Mustapha. Having starred as an extra in the smash hit crime-drama The Stranger, and now moving on to Fate: The Winx Saga, the only way is up for the young actress.

Precious Mustapha will be portraying Aisha in Fate: The Winx Saga

Eagle-eyed Harry Potter fans will recognize Kate Fleetwood for her small role as Mary Cattermole in Harry Potter and the Deathly Hallows:  Part 1. Since then, she has starred in the British series Victoria, the Hulu series Harlots, and as a First Order officer in Star Wars: The Force Awakens.

Kate Fleetwood will be portraying Queen Luna in Fate: The Winx Saga

Some new and original characters will be starring in Fate: The Winx Saga.

When and where did production take place?

After the casting calls were concluded in August 2019, the show began filming in Ireland as early as September 2019, in Wicklow.

Most of the filming for the first season took place in Ashford Studios.

That’s a wrap on Netflix super-series “Fate: The Winx Club Saga”. Love these guys so much. See you in 2020 😎🥳❤️ pic.twitter.com/m4dJoulK1W

Has the second season of Fate: The Winx Saga been ordered already?

Thanks to one of our sources, we can indeed confirm that Fate: The Winx Saga has received an early renewal from Netflix.

This shouldn’t come as a surprise. Winx Club has been one of the longest-running, and most popular franchises on Nickelodeon, which means Netflix is already expecting Fate: The Winx Saga to be a smash hit.

Netflix has yet to confirm the renewal officially, but expect to hear the news drop sometime around the series official release.

fate the winx saga being renewed for season two when there has literally been zero promotion and content the winx’s power is unmatched pic.twitter.com/ZUELtEllSl

Are you excited for the release of Fate: The Winx Saga on Netflix? Let us know in the comments below!