It’s taken a lengthy amount of time, but finally, the first big series from Shonda Rhimes is on its way to Netflix very soon. Bridgerton, the highly anticipated period-drama, and adaption of the Julia Quinn novels is coming to Netflix on Christmas Day 2020.

Bridgerton is an upcoming Netflix Original period drama series created by Chris Van Dusen and based on the smash-hit novels by Julia Quinn. The series is produced by Shonda Rhimes under her production label Shondaland. Despite the output deal between Netflix and Shonda Rhimes being signed in 2017, Bridgerton will be the first entry from the lucrative deal.

If you’re looking for absolutely everything there is to know about Bridgerton, here’s everything that’s known about season 1 (and season 2 of Bridgerton).

When is the Bridgerton Netflix release date?

It has been confirmed that the first season of Bridgerton is receiving a special release date. All eight episodes of Bridgerton are coming to Netflix on Christmas Day 2020.

What’s Bridgerton on Netflix about?

Based on the best selling novels by Julia Quinn, Bridgerton is a romantic period drama. Quinn has been compared to the likes of Jane Austen due to her influence on Victorian-era fiction. The novels were released between 2000 and 2006 and in total, saw eight books released under the label.

The first season of Bridgerton will adapt the first of Quinn’s books The Duke and I.

After spending two seasons in London, Daphne Bridgerton comes to terms that she will likely not ever marry for love. She still holds hope that whomever her future betrothed will be she will find some level of affection for. When the Duke of Hastings, an old school friend of her brother’s, returns to England, he finds himself subject to the attention of many ladies. Determined he won’t marry, the Duke proposes an arrangement with Daphne, and that they pretend to be attached. Believing his influence will help Daphne find her a respectable man to marry, she soon finds herself falling for the man who doesn’t intend to make their fake arrangement a reality

Writing for the series began in October 2018 when we got our first look at Chris Van Dusen and the writer’s room.

In August 2019, Shondaland (the culture/lifestyle blog from Shonda Rhimes’s company) provided the world with the first behind-the-scenes look at production. These images included various photos of table reads, makeup

In September, we got some impressive behind-the-scenes shots at the show courtesy of SomersetLive. The production was taking place in Bath in the United Kingdom specifically in Beauford Square and Barton Street with there also being reports of filming taking place at Royal Crescent and Abbey Green. 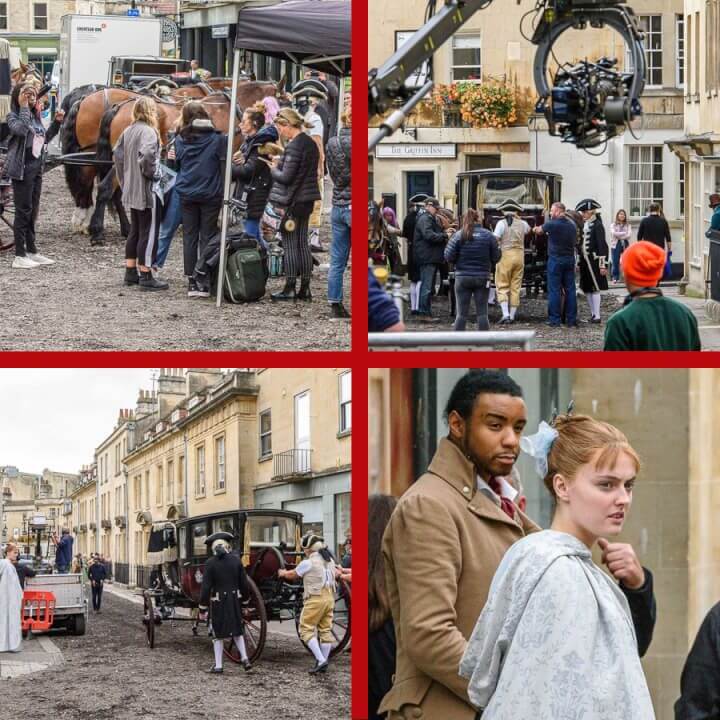 Towards the end of October 2019, Chris Van Dusen (who is the showrunner for Bridgerton) posted that they concluded their final table read for season 1.

Today was the last table read of Season 1 and I got ALLLLL the feels. I STILL cannot believe I get to work with such an unbelievably talented group of people day in and day out-cast, crew, writers, producers. BEYOND excited for the world to see #Bridgerton in #2020!🐝🎩💃💎✨ pic.twitter.com/KSSVBREANK

In December 2019, Chris Van Dusen posted a picture of one of the sets and as you can see, it’s a massive green screen.

Seeing what our incredible production designer @WillHughesjones and his amazing team have been cooking up for us – pure astonishment. 🔨💯😲👌#sets #magic #bridgerton #netflix 🎩💃💎⭐️ pic.twitter.com/npLZwtreie

According to our sources, filming is currently scheduled to wrap at some point in February 2020.

Who’s in the cast of Bridgerton on Netflix?

The majority of the cast for season 1 of Bridgerton was announced back in July 2019. It’s got some fairly big names involved which we will work through below.

The big roles have gone to the likes of Julie Andrews who will play the role of Lady Whistledown who is described as a “sharp-tongued gossip writer”.

📣 Have you heard the news? @JulieAndrews will lend her voice to “Lady Whistledown” in our upcoming “Untitled Bridgerton Series” with @Netflix!! pic.twitter.com/0spRdQ8loX

Regé-Jean Page is set to play the role of the Duke of Hastings and is described as having zero interest in his title or perhaps, more importantly, taking a wife.

Pheobe Dynevor will play Daphne Bridgerton, the young debutante who is waiting in the wings to marry.

Ruth Gemmell plays Lady Violet Bridgerton who is describe being “all warmth, wisdom and love” and will play the matriarch of the story.

Nicola Coughlan who has risen to stardom thanks to her appearance in the Netflix Original/Channel 4 Production Derry Girls will play the role of Penelope Featheringon.

Told you it was big news!!!

Here are some of the other cast members and who they’ll be playing in season 1 of Bridgerton:

In February 2020, we got some more cast announcements for the first season of Bridgerton. This includes two British actresses, Sandra Teles and Harriet Cains, who have both featured in mainly British titles so this will serve as their big introduction to the world.

Everything else we know about Bridgerton on Netflix 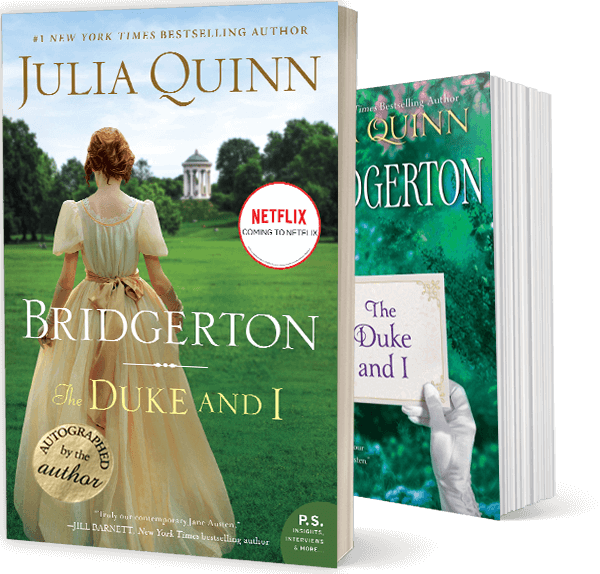 Covers for The Duke and I – Picture: Julia Quinn

Will there be a season 2 of Bridgerton on Netflix?

It’s the world’s worst kept secret that season 2 of Bridgerton is happening. Netflix has kept tight-lipped on the future of the series, but we already know that filming for season 2 begins in early 2021.

Anything else regarding a second season including casting and story at this point would be pure speculation so we’ll leave that until we get to feast on the first season.

Naturally, however, there’s a wealth of books to enjoy from Julia Quinn in the Bridgerton franchise.

Are you looking forward to Bridgerton coming to Netflix? Let us know in the comments down below.