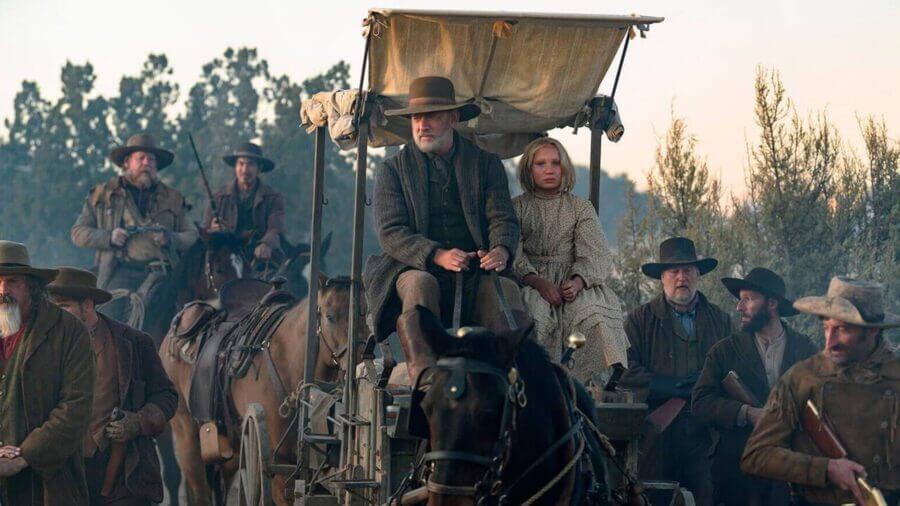 News of the World – Picture: Universal

News of the World, the new Universal movie that was originally scheduled for a theatrical release looks as though it’ll be skipping that outside of the United States and coming straight to Netflix.

Starring Tom Hanks, the movie reunites Hanks and director Paul Greengrass who last worked together on the smash-hit Captain Philips in 2013. Paul Greengrass has also worked on the Netflix Original movie from 2018, 22 July.

Based on the 2016 novel by Paulette Jiles, the movie is set after the Civil War and follows a veteran who agrees to travel across the US to deliver a girl.

The movie was originally with Fox 2000 before the Disney/Fox merger who offloaded the movie onto Universal but due to the COVID-19 pandemic affecting theatrical releases isn’t able to do a global rollout.

Variety reports Netflix has acquired international rights to the movie but doesn’t get into specifics. At the moment, it’s believed everywhere outside the United States will see the movie join Netflix but it’s unclear whether that’ll happen in December 2020 or in early 2021.

News of the World is just one of the many pickups Netflix has made this year but marks the first from Universal. It’s acquired multiple movies from Paramount including The Trial of the Chicago 7 (which released globally) and Spongebob: Sponge on the Run (which released outside the US and Canada).

It’s not the only Tom Hanks movie this year that got sold off either. Earlier this year, Apple TV+ paid through the nose for Greyhound although Tom Hanks said it was heartbreaking to see the movie skip its theatrical release.

As for whether the movie will appear on Netflix in the US seems unlikely. Universal, who plans to release the movie theatrically on Christmas Day, currently has a first-window deal with HBO which is where the movie will likely go later in 2021. Having said that, Variety reports that Universal will be able to put the title on VOD platforms in early 2021 (as soon as 6 weeks after the theatrical release).

Are you looking forward to catching the new Tom Hanks western on Netflix if you’re outside the US? Let us know in the comments down below.