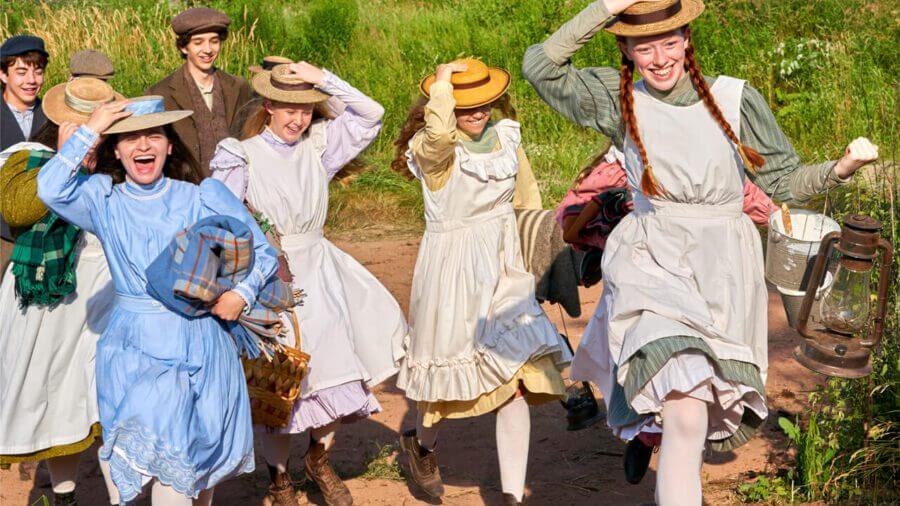 Anne with an E surpassed 1,000,000 signatures in July 2020 (after only hitting 600,000 in early June 2020 and 900,000 on July 20th) and is currently closing in on 1.5 million signatures. It continues to hold the accolade in being the largest Netflix revival campaign ever in Netflix’s history. Here’s a look back at the campaign to revive Anne with an E and what you can do to help.

The final season released on Netflix back in January 2020 and while it still left a lot to cover in future seasons, both CBC and Netflix failed to renew for a fourth season.

The feel-good Netflix co-production with Canadian state broadcaster CBC has been a fan-favorite. The first season released back in March 2017 and adapts the classic Lucy Maud Montgomery novels. The series just celebrated its third anniversary with showrunner Moira Walley-Beckett celebrating saying:

“Anne Nation you are the sweetest! Thank you for remembering that 3 years ago today #AnnEwithanE aired for the very first time. It means so much to me that you remembered and are celebrating it!”

Season 3 of Anne with an E just recently hit headlines again having had a good night at the annual Canadian Screen Awards. In total, it scooped up 17 nominations including best lead actress for Amybeth McNulty and best drama series being the headline nominations.

17 @TheCdnAcademy nominations!!! Our hearts are so full right now! Absolutely honoured to be recognized among these other amazing shows! The love and support from our fans has not gone unnoticed. And even though the road has ended for us, what a way to go out! pic.twitter.com/xiIQK562KX

Campaign to Save Anne with an E Timeline

There have been several major milestones for the campaign to save Anne with an E so let’s take you through some of the big ones.

Perhaps one of the earliest signs at how dedicated Anne with E fans was with the New York Times Square billboard effort. In addition, fans spent money out of their own pockets buying up billboards throughout Canada too. There were also reports of fans buying billboards on highways in states such as Texas.

Responding to the campaign efforts Moira Walley-Becket said on Instagram:

“I am a writer and words fail. Anne Nation, how can I express how you fill my heart? You have created yet another amazing, unified gesture of love and solidarity. I am humbled and honored by your passion, your zeal, and your steadfast support. Thank you for loving my show as much as I do and for telling the world how you feel.”

Of course, the signature effort has been in the Change.org petition that first started up on the platform on November 25th, 2019. There are also other petitions around the internet all varying in different successes with some having a few thousand signatures to others in the tens of thousands.

The main campaign had a simple mission:

“Guys we all loved season 3, but there is so much more we need answers to and want to see ! The whole ka’kwet storyline and Anne’s Queen life and obviously how shirbert develops! So let’s hope this petition catches the eye of Netflix and they decide to renew the show for season 4! Anne would want us to fight!”

As we mentioned above, the petition itself has scored several milestones. It hit 600,000 in June 2020 with it passing the one million accolade on July 25th, 2020.

1 million signatures for Anne with an E petition

As of December 3rd, 2020 the campaign was at 1.4 million signatures with that number growing significantly by the hour.

The series also continues to trend on Twitter too. In late November 2020, the campaign managed to trend ONE YEAR WITHOUT ANNE which coincides with its season 3 finale air date in Canada. A similar campaign is likely planned for January 3rd which is when it got its Netflix release.

ONE YEAR WITHOUT ANNE https://t.co/GwQy7m53as

The series renewal efforts have also had celebrity endorsements too. Ryan Reynolds famously called for a renewal saying: “You guys might want to renew Anne with an E. Unless ‘final season’ is just a fun way of saying ‘halfway point,’”

How to get involved

A fan account has put together a link tree page that gives Anne with an E multiple ways of getting involved. Primarily, it involves signing the petition and requesting the title to Netflix themselves.

Will Netflix bring back Anne with an E for season 4?

Despite the cancelation, there is a chance, despite it being very remote, that Netflix or CBC could reverse course. We’ve seen how campaigns to bring back shows have been in the past and Netflix is always looking to score brownie points with its subscribers.

We still think the best chance Anne with an E has is with a conclusion in the form of a feature film. However, as we mentioned earlier, it’s unclear whether Netflix could do this by itself or it’d need the blessing and/or involvement of CBC in Canada.

Of course, that’s just speculation right now but we wouldn’t rule out anything at this point.

Do you want to see Anne with an E come back for season 4? Let us know in the comments.