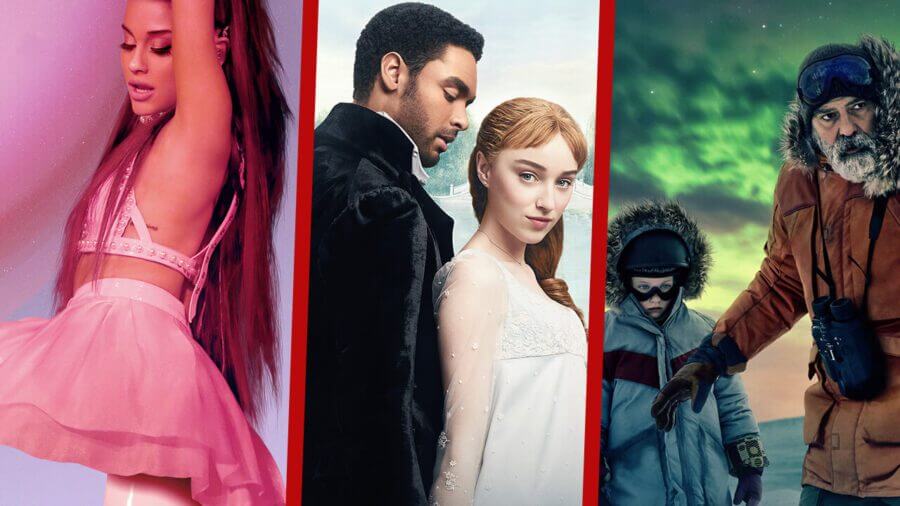 The holidays are finally upon us. After a rotten 2020, if you’re looking to take it easy and kick back with Netflix, there are a number of great new movies and TV shows on the way over the next 7 days on Netflix. Here are some highlights and the full preliminary list of what’s coming to Netflix US between December 21st and December 27th, 2020.

Our three highlights coming to Netflix this week are all Netflix Originals that can be enjoyed by Netflixers globally.

ariana grande: excuse me, i love you

There’s a number of names that stand out when you ask people who is the world’s biggest pop star but many lists will include Ariana Grande who headlines this documentary/concert of her performance in London for the Sweetener World Tour.

Going up against heavy competition from HBO Max with Wonder Woman 1984 and Disney+ with Soul is the first major series from Shonda Rhimes in the form of the Downton Abbey-esque new series, Bridgerton.

On the eve before Christmas eve, Netflix will be rounding out their lineup of stellar December 2020 movie blockbusters with the release of The Midnight Sky directed and starring George Clooney.

The movie follows a scientist in the Arctic hoping to stop astronauts from returning home after a catastrophic event.

Unfortunetely, reviews from both critics and audiences have been very mixed thus far.

If you want to see what’s coming up beyond next week, check out our January 2021 preview or our comprehensive 2021 and beyond series preview.

Full List of What’s Coming to Netflix This Week

Note: Those marked with an N are Netflix Originals. Release dates are subject to change.

Coming to Netflix on December 21st

Coming to Netflix on December 22nd

Coming to Netflix on December 23rd

Coming to Netflix on December 25th

Coming to Netflix on December 27th

What will you be watching on Netflix this week? Let us know in the comments down below.