Netflix has released the fewest amount of Netflix Original stand-up specials since 2016 but there were plenty of highlights from the year. Here are our top picks of the best new specials to hit 2020, a look at the numbers, and what specials are on the way in 2021 and beyond.

2020 saw some stand-up specials from the biggest names in the business. Jerry Seinfeld returned for his second special, Jim Jefferies and Vir Das for their fourth specials,

Some of the comedians to have their first specials in 2020 included Eric Andre, George Lopez, Urzila Carlson, Leslie Jones, London Hughes, Michael McIntyre and Pete Davidson.

According to What’s on Netflix readers, the best special of the year was the intimate Kevin Hart special which released on Netflix on November 17th. This was Hart’s second Original special for Netflix.

How many stand-up specials did Netflix release in 2020?

How does this compare against previous years? Well, it’s down on previous years and there are a couple of reasons specifically this year for this happening as we’ll discover in a second. 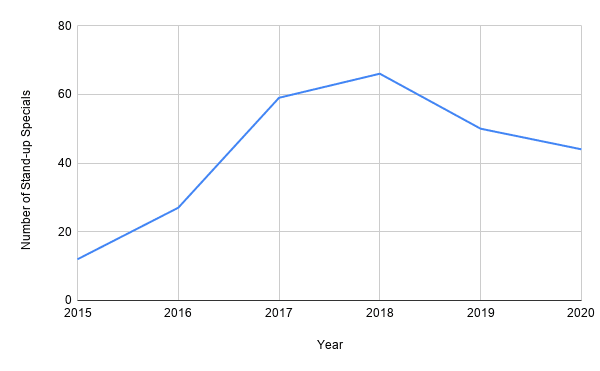 The aforementioned YouTube special, which was Dave Chappelle’s 8:46 was a reflection on the killing of George Flloyd and subsequent protests and riots that occurred, which went onto become the top trending video on YouTube for 2020.

Here’s the language breakdowns of the stand-up specials added (to Netflix US) in 2020:

So why has the stand-up special count dropped over the past year and can we expect the same going forward?

Well, in October 2019 Bloomberg reported that Netflix was purposely cutting back on stand-up specials. While it didn’t necessarily give a precise reason as to why Netflix executives were keen to point out they were diversifying in other forms of comedy whether that be sketch comedy series or something else.

There’s also definitely an element of COVID-19 playing a part here too. Most stand-up specials are performed in front of live audiences which is heavily hampered by lockdown and COVID-19 restrictions. That’s why towards the end of 2020, a lot of the specials released were sets from comedians’ homes or very intimate venues.

What stand-up specials are coming in 2021 and beyond?

A number of comedians have already announced new specials coming in the future.

Ricky Gervais will be returning for his Supernature tour next year.

Other comedians on the way with new specials include:

Netflix is also set to release an extended cut of Chris Rock’s Tamborine special in the near future also.

What did you think about Netflix’s 2020 stand-up special offerings? Let us know in the comments.