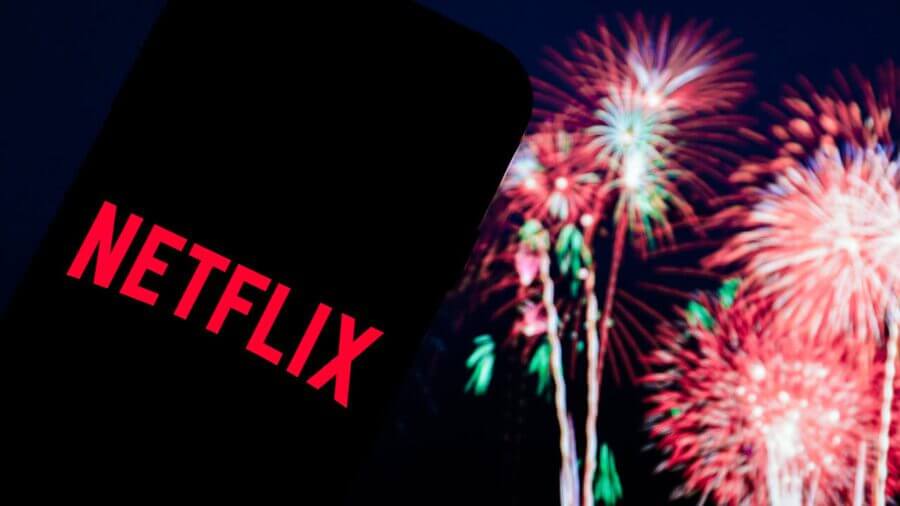 Netflix ended 2020 with expanded libraries around the world despite having lost plenty of licensed content throughout the year. Here’s a recap of how the Netflix libraries look going into 2021 and how many titles are available on Netflix UK, CA, US and AU.

Before we begin, please note that all data is based on the library as of the end of December 31st, 2020. Huge thanks to Maft from NewonNetflix.info for help sourcing the article data.

Netflix Originals have grown to be an even bigger slice of the pie in 2020 and has ramped up significantly throughout the year but has tailed off towards the end given production woes due to COVID-19.

Netflix Originals are a growing majority of the Netflix Library

Which country has the most number of Netflix titles?

You can see here that while the Netflix US library has grown since January 2019 it’s not grown as quickly as other regions such as the UK, Canada or Australia.

Netflix UK has had the biggest growth over the past two years with a net gain of 1065 titles. Netflix US had a net gain of 389 titles. 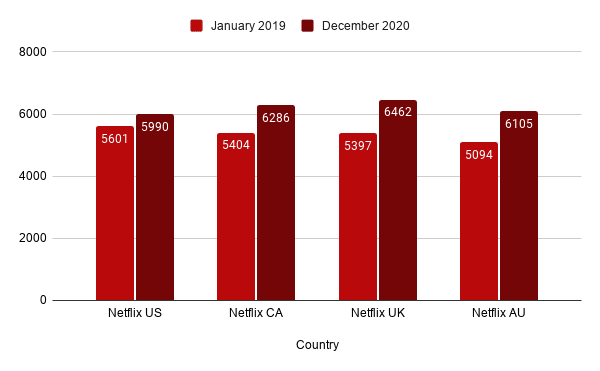 Although the net additions are up overall, that doesn’t mean titles haven’t left the service. Here’s a breakdown of the gross additions and losses for each of the four English-speaking Netflix regions.

Netflix Australia an excellent 2020 though with a net gain of 832 titles.

Has the pandemic slowed additions?

One question you may have is whether or not the pandemic has been slowing additions to Netflix.

Here’s what the gross additions look like for 2019 and 2020 for Netflix USA. This includes both Netflix Original titles and licensed titles. 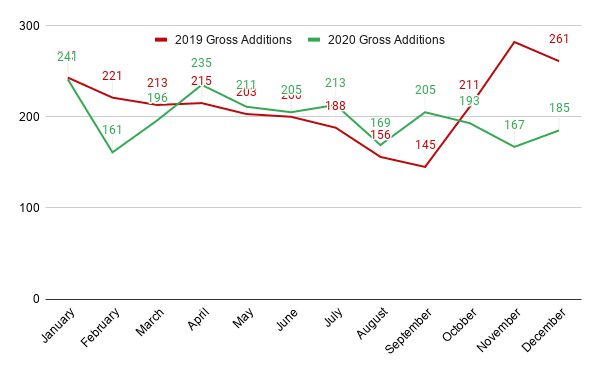 On just the Netflix Original side, we haven’t seen a significant slowdown compared to 2019 yet. While Netflix hasn’t been immune to the effects of the pandemic on productions, it has managed to plug the gaps by buying up “Originals” from elsewhere. 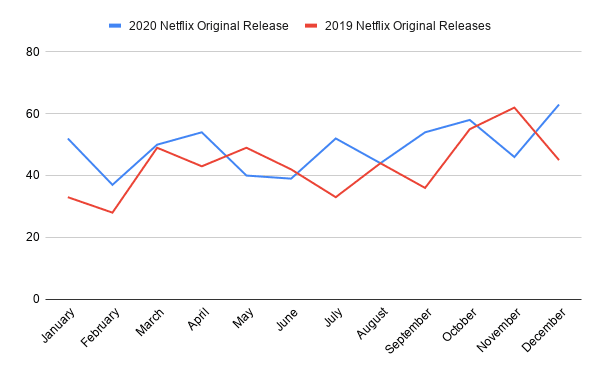 New Netflix Originals added to Netflix over 2019 and 2020

How the Netflix library numbers compare to competitors (in the US)

Let’s now compare how the Netflix US library currently stacks up against its competitors. We weren’t able to source an exact number for the Amazon Prime Video library but some sources put it at over 18,000. 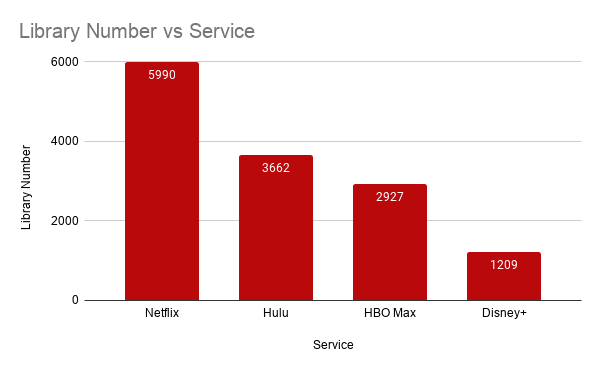 If you liked this breakdown of the Netflix library. We’ve done more in the past including working out that roughly 55% of Netflix’s library is comprised of English titles. We also tried earlier in the year to calculate how long it’d take to watch all of Netflix in March 2020. Both of these articles are slightly outdated but shouldn’t have changed too dramatically.