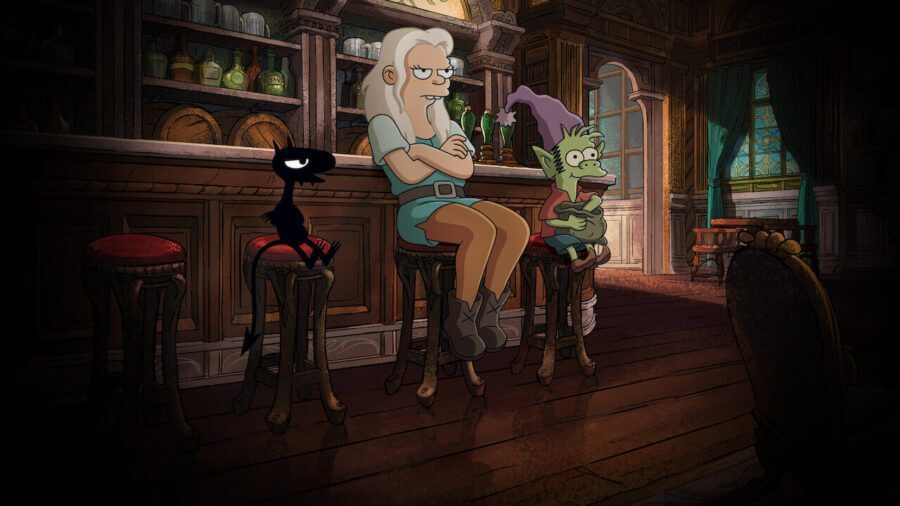 Another 10 episodes of Disenchantment are definitely on the way with the show renewed through to season four (part 4). When will they be hitting Netflix and what can we expect from Disenchantment season four on Netflix? Let’s take a look.

The Matt Groening series produced exclusively for Netflix first debuted in mid-2018 with new seasons releasing almost every year since.

In our opinion, the show got off to a very slow start but has slowly been finding its feet. Season three, in particular, has been our favorite so far with lots of laughs and engaging storylines from episode to episode. In addition, the visuals of the show continue to impress. Having said all that, we don’t believe the show has yet to hit the same heights as Futurama or The Simpsons at its best.

Has Disenchantment been renewed for season four? When will it release?

So let’s move onto season four (or part 4 as it’ll be named on Netflix). It has already been renewed with the final 10 episodes of the so-called second season (curse you Netflix naming conventions). That means by the time season four (part 4) rolls around, Netflix will have to decide whether it wishes to continue the show.

If you’re thinking that’s unlike Netflix to renew shows so far out ahead into the future, you’d be right. Only a handful of shows have ever had the privilege with Orange is the New Black being the biggest live-action title to have the honor but a number of animated titles being able to work far into the future.

As for when season four will hit Netflix, it seems highly unlikely we’ll see it in 2021. Instead, 2022 seems the most likely with the earliest being in January 2022 but if the wait is as long as it was for season three, it may not be until April or May 2022.

What to expect from season four of Disenchantment

Let’s recap the final episode before diving into some speculation surrounding season four.

Zøg is deemed to be unfit to be king by the tenth episode of season three and that means the crown heads to Bean who is now crowned Queen. Any peace was short-lived, however as green smoke hits the castle and sees Big Jo and Porky return to apologize for their past behavior towards Bean and the gang. Untrusting, Big Jo is locked up but it’s revealed he’s working in secret with Odval.

On top of that, a garrison of ogres are on the way to Dreamland leading to Elfo having to recruit an army but ultimately ends up sacrificing and ends up being captured. Bean and Mom are on the way to hell where Bean is set to marry someone who resembles Alva (but is believed to be the Devil) and poor Luci has the worst of it all having been killed and waking up in heaven.

You can find some great breakdown on the final episode plus even more speculation with Austin Burke who has been a big fan of the show throughout. He compares the end of season three to The Empire Strikes Back with heroes scattered and looking like there’s not much to go on for.

In the meantime, if you need more Disenchantment in your life, be sure you’ve picked up the comic book “Untold Tales” but from our research here in the UK, it’s incredibly hard to get your hands on.

FINALLY finished Part 3 of Disenchantment and I need Part 4 RIGHT NOW YOU CANT JUST END IT THERE pic.twitter.com/kKq6BjV5pZ

can’t wait for season 4 (since i’m desperately hoping for another Venture Bros season)!!!

Are you looking forward to the next season of Disenchantment? Let us know in the comments down below.