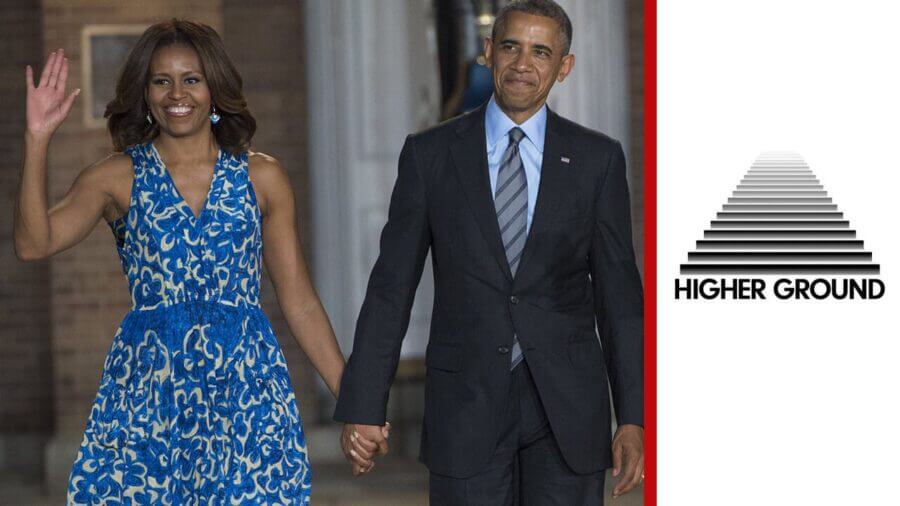 The Obamas are working on lots of exclusive Netflix content over the next few years and we’re going to summarize their entire past and future lineup in this ongoing article. Here are all of the Higher Ground Productions on or coming soon to Netflix.

Barack and Michelle Obama both signed a landmark output deal (under the newly created Higher Ground Productions) with Netflix in May 2018 to produce movies, TV series, and documentaries for the streaming service.

The majority of new titles were announced as part of a press release from Netflix in February 2021.

One title we’ve excluded from the list that also involves Barack Obama is the David Letterman interview on My Next Guest Requires No Introduction and an episode of Comedians in Cars Getting Coffee.

Oscar-winning documentary American Factory teamed Higher Ground Productions up with Participant to look into post-industrial Ohio where a Chinese billionaire opened up a new factory and how that operation came to be and how it’s going.

Directed by James Lebrecht and Nicole Newnham, this documentary takes a look at a revolutionary summer camp that was set up for kids with disabilities.

It was an awards magnet scoring 8 wins and 27 further nominations with high critical acclaim.

This documentary looks into the former First Lady’s book tour which occurred in 2019. The documentary was directed by Nadia Hallgren and went onto score 4 Primetime Emmy nominations.

All these titles are expected to release “over the next several” years and Netflix stresses each is at “different stages of development.”

Laughing Wild and Wonder Worldwide are teaming up with Higher Ground Productions for a pre-school animated series based on the books by Andrea Beaty and illustrated by David Roberts.

Here’s what the series will be about:

“Ada Twist, a young scientist who will explore helping people through scientific discovery, collaboration and friendship.”

Mohsin Hamid’s novel Exit West is set to get adapted into a feature film with Left Handed Films also involved. Riz Ahmed is already attached to the project in both a producer and acting capacity.

Yann Demange and Morten Tyldum will direct with both Anthony and Joe Russo also attached to produce.

Higher Point Productions will be adapting the novel from Angeline Boulley into a YA series about a native teen who is trying to root out the corruption that’s taken hold in her community.

Mickey Fisher is on board be the showrunner with Wenonah Wilms set to co-write the series.

With the mass exodus of BBC and Discovery nature programs from Netflix, Great National Parks will go some way to helping bolster Netflix’s lineup in the genre again.

The series will dart around the world looking into the various national parks and wild spaces that exist focusing on the species that occupy them.

Wild Space Productions are working on the project too with James Honeyborne of Blue Planet II also attached.

This feature film will follow the true story of Tenzing Norgay and Sir Edmund Hillary who are famous for being the first men to reach the summit of Mount Everest.

Jennifer Peedom is set to direct.

The G Word with Adam Conover

Adam Conover, known for his TruTV series Adam Ruins Everything, will be hosting a brand new comedy spun docu-series looking into the inner workings of the government (the G-word).

Tayarisha Poe who is listed on Variety’s “10 directors to watch list” will direct The Young Wife.

“It follows Celestina, 29, on the day of her first wedding. Or not a wedding, exactly, but a party. A party where there’s movement, and Celestina is out of sync. The guests flood in; a storm approaches.”

With Disney+ having The Muppets and HBO Max having Sesame Street, Netflix’s first real stab at the puppet kids genre will be a brand new cooking show produced and starring Michelle Obama alongside two puppets, Waffles and Mochi.

Max Borenstein and Sara Colangelo premiered this movie at the Sundance Festival in January 2020 and will be hitting Netflix around 9/11 in 2021.

Worth follows the behind-the-scenes court battles that occurred to try and help the victims of 9/11.

Higher Ground Productions picked up the movie for Netflix but was originally produced by MadRiver Productions, Sugar23, Anonymous Content, and Riverstone Pictures.

WORTH, from director Sara Colangelo and writer Max Borenstein, is coming to Netflix this September — the 20th anniversary of 9/11.

A biopic about Kenneth Feinberg, the lawyer who oversaw the 9/11 Victim Compensation Fund, WORTH stars Michael Keaton, Stanley Tucci, and Amy Ryan. pic.twitter.com/HZIl2Y3vOU