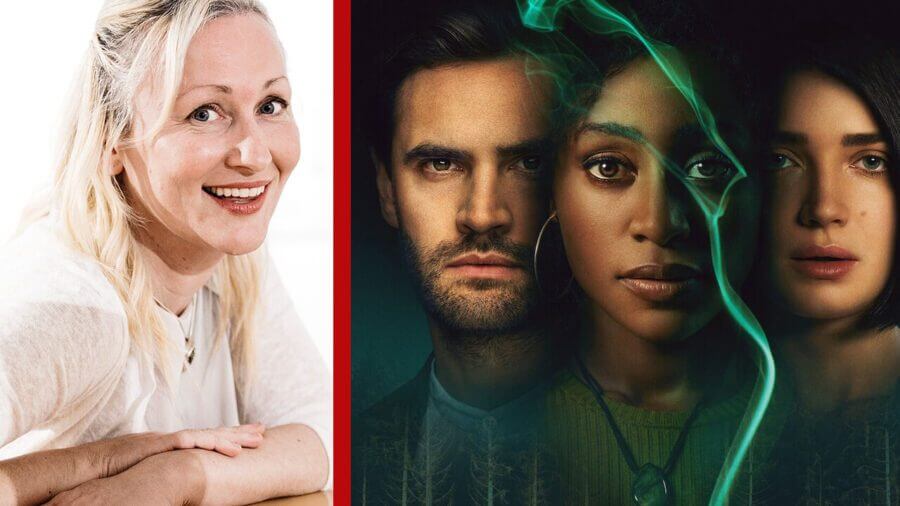 This is a spoiler-free interview with Sarah Pinborough, the UK author of the book, Behind Her Eyes. An adaptation of her novel was released on Netflix on 17th February as a sizzling six-part series. The book and series are currently trending on social media with #WTFThatEnding due to the controversial, shocking, and unexpected conclusion.

Behind Her Eyes follows the lives of a single mother, Louise, and a married couple, Adele and David. Full of twisted mind games, sexual attraction, and psychological intrigue.

Here, Sarah talks to Chris Roberts MBE about how she decided on ‘That Ending’, what she thinks of the Netflix series, the casting of the characters, and a bit about herself and her writing career.

Sarah is well known for having more than 20 novels published in several countries; her modern re-telling of fairy stories; Torchwood; The Forgotten Gods Trilogy; The Nowhere Chronicles; Cross Her Heart; Dead To Her and she also writes fantasy fiction under the pen-name of Sarah Silverwood. Sarah was also the 2009 winner of the British Fantasy Award for Best Short Story and also the 2010 and 2014 winner of the British Fantasy Award for Best Novella and has four times been short-listed for Best Novel. She is also a screenwriter, who has written for the BBC and is currently working on three TV projects and the film adaptation of her novel, The Death House.

Sarah lives in the small former market town of Stony Stratford in Buckinghamshire with her dog, Ted. She says she has always written and it was something she knew she was comparatively good at in school, sitting at the top of the class for creative writing. Although she wrote school plays and short stories, she didn’t really take writing seriously until her late twenties. Sarah has written in many genres, including thrillers, fantasy, horror, and fairy tales, and claims that she is at her happiest when blending different genres. She also admits that she really enjoys screenwriting and, obviously, novels. “I think every writer tries to make each book different,” said Sarah. “I’m currently contracted to write psychological thrillers, so I have to stay in that genre. But I do like playing around in different genres and I like to try to weave bits of other things into my thrillers.”

Sarah’s talent cannot be confined to one genre. It’s far too complex. In Behind Her Eyes, she has written about what seems to be a typical love triangle, but this triangle is anything but typical!

Sarah has now had more than 20 novels published in several countries and I wondered how she starts writing a story. Does she plan it meticulously with a start, middle, and an end? And, in the case of Behind Her Eyes, how and when did she decide on ‘That Ending’?

“There are planners and there are pantsers (flying by the seat of…),” explained Sarah. “I am definitely a planner and I have key plot points in place before I start writing.”

Sarah says that Behind Her Eyes took her about eight months to write. She finds the planning is always the hardest part, but she had the whole last chapter written before she even started writing the book! “In the case of Behind Her Eyes, I think it would have been impossible to have written the book without that ending having already been in place. There were too many clues that needed seeding,” said Sarah. “So yes, the whole book was created around that ending.”

There has been so much controversy about ‘That Ending’. Does she regret her choice of ending, I wondered? Sarah soon confirmed: “No absolutely not! The book is all about that ending. When the book was being sold to the US market, I had a lot of publishers who wanted it. There were a couple of them who wanted to change the ending or make it less shocking, but they were disregarded straight from the off! I love the ending and it is the ending that makes the book and Netflix series so different.”

So, for anyone who has read the book, but not yet seen the Netflix series, Sarah confirms that not much of the plot was changed in the series. She went to the read-through and was on set for a couple of days, which she said was great fun! Both Left Bank (the production company behind the series) and Netflix kept her in the loop and were very open about their processes. She also confirms that the ending is the same in the series and novel. “It’s a really faithful adaptation and Netflix have done the ending really well. The whole team at Left Bank were very on board with the ending and were determined it wouldn’t be changed.”

As an author, Sarah believes that the novelist shouldn’t really have any say at all, as they have basically handed it over for the TV or film people to decide what to do with it. Sarah, therefore, had no say in the casting – it was all down to Left Bank and Netflix. She said: “The casting is great and they’re all brilliant in it. I can’t imagine the characters now without seeing Simona, Tom, Eve and Robert – they have become the characters to me.”

I’m not going to spoil the ending by giving away any clues. What I can say is that there are no loose ends left untied. Everything makes sense and you are not left guessing what happens or left having to make up your own ending.

The choice is yours!