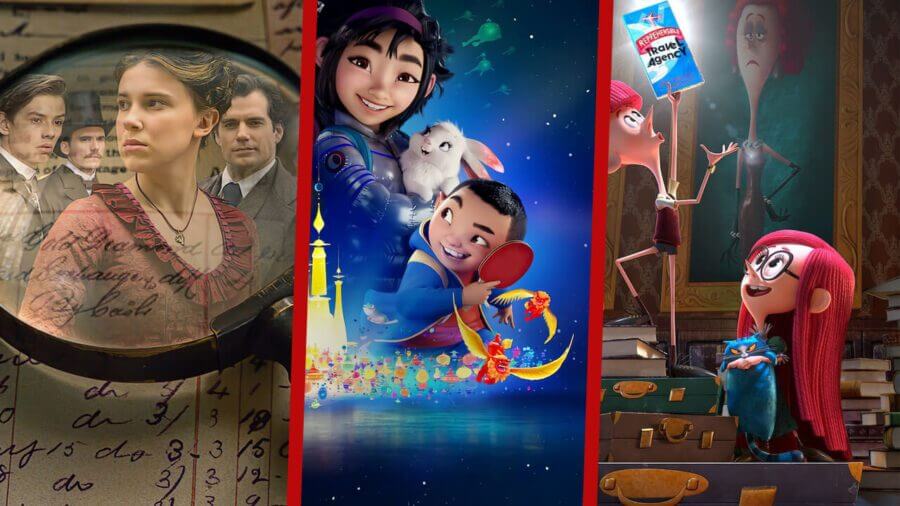 Pictured: Enola Holmes, Over the Moon, The Willoughbys

Emily Horgan returns for another collection of articles tackling Netflix’s strategy in the kid’s sector this time taking a look at Netflix’s efforts over the past year and how its biggest movies perform alongside movies from Disney and other providers.

2020 will go down as a seminal year in the history of “Streaming Wars”.  Pandemic aside, there were already big plans afoot, with Disney+ continuing its international rollout. Warner, Comcast and ViacomCBS were also all readying OTT slingshots with HBO Max, Peacock and Pluto TV. That being said, the notional streaming “wars” are still in their early days. In the scheme of Peter Jackson’s Tolkien adaptations, we still haven’t finished The Hobbit: An Unexpected Journey. Relevant parties have set off on noble quests, they’ve even shown guile in the face of unforeseen circumstances. In the background, however, sits an opposing force that has been building its strength for some time, Netflix.

Parking the Middle-earth indulgence, a crucial development in the “battlefield” over the last year was an advancement in the selection of publicly available numbers. This gave us more common artillery with which to engage.  “Datacdotes”, viewership performance stats announced by Netflix periodically have been forthcoming since 2018.  2020 saw daily Top 10s from Netflix’s trending data and weekly releases of Nielsen’s minutes streamed for SVOD. No data is perfect, a thorough round-up of criticisms can be found from site collaborator and friend, Entertainment Strategy Guy, here, here, here and at any given moment here. Kid’s data, being a sub-section of this, is by nature scanter and shakier, unfortunately. However, we will do our best to pull some insights, like a favored axe from an opponent’s chest.

I appreciate that early March may seem a bit late for a 2020 retrospective, but the dog did not eat my homework. Results from some core kids and family content released over the holidays needed time to crystalize. In addition, there have been pertinent developments on what data is available. The clearest divide for kids is the difference between results for films and results for series, hence the breakout of each into its own section of analysis.

Film performance based on Netflix’s “Datacdotes”

For movies, kids content has a strong presence in every data set. With that in mind, it makes sense to go straight to the horse’s mouth with the information Netflix has released in terms of kids/family movies launched in 2020. This information looks at the worldwide catchment of viewers who at least sampled the content across the first 4 weeks post-launch. The ranking for kids/kids adjacent content last year was as follows:

Full disclosure, Enola Holmes and The Kissing Booth 2 don’t sit in the Netflix kid’s section.  Common Sense Media ratings cast them close to family, however, and editorially, star talent and subject matter give them more than peripheral appeal. It’s worth noting that both animated films, The Willoughbys and Over the Moon, sat in the lower half among all the “datacdotes” Netflix announced in 2020.

Film performance based on Trending Data

Moving on to trending data, which is expertly tracked and aggregated by our partners at FlixPatrol. In order to compare oranges with mandarins, as opposed to apples, we can consider the Netflix releases alongside trending data captured in the first 4 weeks post content launch.

Here we see another strong showing for live-action with Enola Holmes topping it out once again. Top scoring for animation is household name, The SpongeBob Movie: Sponge on the Run. Creatively termed an “original” by Netflix, this was subject to a compromised distribution strategy in the face of COVID, and is yet to be made available in the US and Canada.

All the films on this list are also seen to cut through when we look at the total worldwide Top 10 Trending Movies for 2020. This will have a tendency to favor films released earlier in the year. Alongside them is a constant peppering of Kids franchise movies that saw big success at the box office. Illumination Entertainment enjoys strong featuring from the Despicable Me franchise as well as Dr Seuss’ The Grinch. This trend becomes more pronounced when you look at results on a country basis, as the 3rd party licensing of movies on Netflix has fragmented internationally.

Film Performance based on Nielsen

This brings us nicely to the 3rd dataset we have in play, Nielsen’s US minutes watched for streaming. Weekly Top 10s for this were introduced by Nielsen in the second half of 2020.  In January we got the full year roundup across 3 categories: original series, acquired series and films. The value of big studio, franchise movies is sharply demonstrated with new Disney classics performing by a country mile.  Sequels and derivatives also feature strongly. Having enjoyed 90%+ real estate in the 2 other categories, Netflix’s footprint in films is significantly reduced:

This sums up the “datafication” of home entertainment. Previously, the sole metric of this was individual unit sales, be it a physical DVD or digital. The game-changing difference in the current OTT reality is that you can now see how much a favorite DVD is being played. Parents will not be surprised that multiple sources can confirm, it’s a lot.

It’s worth noting that, from a weekly Nielsen Top 10 perspective, Enola Holmes, The Christmas Chronicles Part 2, Hubie Halloween and We Can Be Heroes all cut through during their premiere period. The ongoing release of these stats started too late to capture the premiere period of The Willoughbys. Over the Moon did not have enough minutes watched to make it in. Luckily for us onlookers, Nielsen have begun delivering weekly Top 10s across these three categories since the start of 2021 which should give us more information in the future.

Comparing data points, it’s undeniable that Netflix has a really great spectrum of live-action movies that serve older kids, up into teenagers and beyond. Everything from “clean teen” movies (Feel The Beat), safe enough to sit directly in the kids section, to Rom-Com film series (The Kissing Booth, To All the Boys I’ve Loved Before), to heart-felt dramas (The Half of It). This melting pot has something for every age, stage and emotion.

In addition to this, genre/seasonal-specific films are also seen to bat way above their instinctive weight. The Christmas Chronicles: Part 2 and The Princess Switch: Switched Again bring the multi-installment magic to this, whilst Hubie Halloween and A Babysitter’s Guide to Monster Hunting also deliver.

Spotlight isn’t shone on the great job this team is doing enough.  Over the past year, we’ve had numerous, perfectly wrapped soundbites, and lavish write-ups on the Netflix animated slate. Performance metrics for animation actually plays second fiddle based on what we’ve looked at here.  Successfully servicing traditional media formats to the entire teen audience has been eluding established content providers for the last decade at least; Netflix has nailed it.

Ironically, one thing which could set a rocket under the Netflix animated film slate is already a core pillar of what they do for their live-action teen offering. This is creating multi-installment film series. With animation skewing younger, preferably this content could be built out to cultural impact at a franchise level, helping to balance against the studio output deals they’ve been hemorrhaging for years. The ambition is certainly there from what they’ve said and how they’ve invested in creators, but they’ve yet to deliver an animated film that demonstrates super repeatability, derivative potential and fandom.